I’m getting to the stage on this blog that I have to check if I have mentioned a band already. I think I should take that as a good sign, both of the health of americana music in Ireland and the health of this blog. 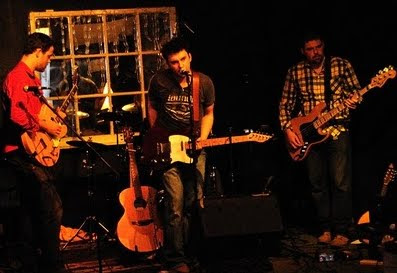 The thing is, I think I have come across Steve Young & The Union a few times before and why it has taken me this long to write about them I don’t know. Now to remedy that situation. Steve Young started off on his current moniker in 2009 with the recording and release of his debut ep “A Boat Called Lottery”. It was from the positive feedback from this that he formed the Union. The Union currently consisting of John Sweeney, Johnny Byrne, Tommy Murtagh, Sharon Hussey, Kenny Hollywood and Steve Deasy. Anyway two and a half years later, after the use of three studios with the help of 11 musicians, the debut album was born. That’s commitment. “Wilderness Machine” was self-produced with none other than Gavin Glass. That man again. The production is superb quality once again and music just as good.

The story of the Steve Young & The Union band is a fairytale of sorts. Man makes music. Man forms band. Band record album. Band gets signed. As of early this year, Steve Young is part of Cellar Music Recordings and it seems album number 2 is not far off (2014)!

To the music then. Well the Facebook pages lists Bob, Ryan, Bruce, Neil & Tom as artists he is fond on. I think myself Ryan as in Ryan Adams looms over the recordings of Steve Young. Loom might be the wrong word but his influence can be felt on the debut album. I would not describe SY&TU as americana but more alt-country. The songs are bit more aggressive for americana though there are plenty on the album like “Hung, Drawn and Sung to” that could be classified the latter. Enough of classifications. “Fairbanks” is a gentle, rolling, musing ballad with great guitar licks and atmospheric fiddle that bursts into a fiddle and guitar competing solos. Imagine driving away from your home town, not to return for a while. This is what would be playing.

“Coke & Rum” might be one of the tracks that is reminiscent of Ryan Adams circa late Whiskeytown/Heartbreaker era. The song is a spunky country jaunt, jumping along with that electric harmonica fusing it together.In contrast with “Fairbanks”, this is the song you play scurrying out of town after a bar brawl.

You can keep updated with the band via the Facebook page. You can also stream the whole album on Soundcloud and then go buy the album on iTunes here .