The Viking Project have been featured on the blog previously. The band are a five piece that are set to make an impact on the Irish music scene with their first official release. 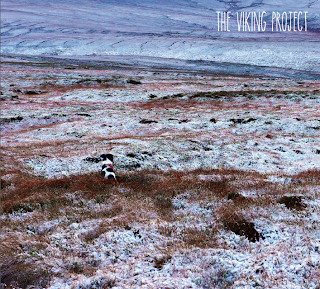 The group hail from north Wicklow and include Michael Purcell (Harmonica, Vocals), Ste Guyett (Guitar,Vocals), Andy Guyett (Drums, Vocals), David Tully (Guitar, Vocals) and Caimin Gilmore (Bass, Vocals). The band formed in April of 2011 and since then have put out a few tracks and videos. However this self-titled six track ep/album/mini album is their first official release.

There must be something about the water in north Wicklow as I believe fellow hard-folk enthusiasts ‘The Cujo Family’ (who also happen to be supporting them on the album launch night) hail from the same vicinity.

And that is what the sound of ‘The Viking Project’ is: hard-folk, blues rock. The first single from the album is ‘Coral Bay’. As track 1 on the album as well, it definitely does what you hope to hear from a opening track. Leaping into your ears, the song is a rock/blues/alt-country fusion of crashing symbols and harmonica licks.

With a group made up of four vocalists, the group is not lacking on singing talent. The sound is as you might imagine from a group with a name that The Viking Project conotates; heavy on rhythm and rough around the edges, the songs here are real sweaty bar room tunes. ‘Same Ole Lies’ is a real rollercoaster of a composition, with an immersive melody, heavy guitar lick and that soaring harmonica, the song hits you on all sonic sides.

That is not to say that the group are throwing noise at the songs to hide anything else. ‘Constance Keane’ is a story-led tune that showcases the groups vocal and lyrical talents. Meanwhile ‘Got Sunk Down’ is poppy blues tune that soars into life in the coda.The stripped back ‘Same Ole Reprise’ instrumental has a haunting air about it, different from the parent tune and feels like it  should be on a Coen brothers western soundtrack.

The group are launching their mini-album next week on Friday 28th March in the Purty Loft in Dun Laoghaire. Support is from the excellent Cujo Family. This is only the beginning of their planned releases this year with a full debut album to follow later on in 2014. You can keep up to date on the goings on of The Viking Project through their Facebook page and the official website.