It’s the start of the summer here and sunshine is beginning to appear. It’s about this time that I start thinking about the tunes to accompany my summer night drives down the country and round the place. Doing a few races and that this summer means more time in the car but at least I will have the time to catch up with some great new music. That’s why I am happy to have discovered Gareth Dunlop last week. 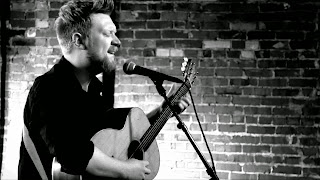 A man that hails from Hollywood was always going to have a special career ahead of him ((that’s Hollywood Co.Down by the way). Gareth started his career in music at a young age playing his father guitar. Gareth progressed to study at Bangor College and from this he built up experience in sound engineering. His too progressed with gigs in bars around Belfast and beyond. His big break came in the vernarable Belfast Nashville Singer Songwriter’s Festival in 2011 when he was awarded Young Songwriter of the Year. That led him to Nashville when he signed a publishing deal.

A talent such as Gareth’s was always going to get his deserved break. His first EP was actually released the year previously. “Rooms” features some lovely mixture of acoustic and nice and easy-going americana melody’s. My clear favourite is “Dreams”. Led by a jaunty piano, the song carries itself along with a foot tapin’ melody that easily drags you in and leaves you sauntering along to the tune without even realising it.

After a while Gareth put his musical and college experience to good use by building his own studio in Hollywood. He has been using the studio mainly to record his own music. His follow-up to “Rooms” was the “Devil Mocks Me” EP. He has been mainly working on EP’s as releases and has been over and back from Nashville. His musical style is hard to pinpoint. His songs are generously warm, organ and piano feature throughout. The melodies are soft yet not slow enough to let you get distracted. Songs like “Trick of The Moonlight” really showcase his talent. Excellent structure, a beautiful melody and words that add generously to the mood of the song.

Gareth has been busy as a songwriter too. He has contributed songs to TV in the U.S. such as “Cougar Town,” “One Tree Hill,” “Private Practice,” “Army Wives,“Life Unexpected,” and “Nashville”. His work with “Nashville” certainly has increase his profile. He teamed up with Kim Richards to write a number of songs for the show (some of which were recorded by the show’s performers). This song from the Safe Haven soundtrack makes it obvious why his music has been so heavily featured in TV. The style and lyrics easily accessible and immeasurably listenable.

Definitely an artist that deserves more attention and is criminally under-rated here in Ireland, Gareth is an artist that I will be keeping an eye out for in the future.

Catch up with Gareth’s going-on’s through his official site and his Facebook page.