After my recent preview of festivals, I thought I would look at a few festivals in detail that deserve or merit a bit of more attention and who is playing at them. This week it is the forthcoming Valentia Isle Festival. 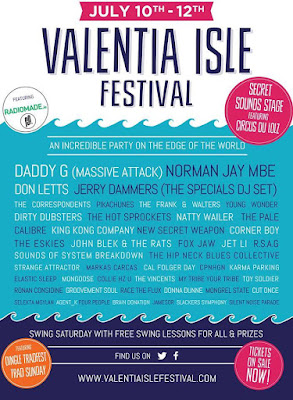 The festival has been going for a number of years though its only crossed my radar this year. That’s likely to do with the fact that this is the first summer that the festival has moved from its usual September slot to a new spot in the second weekend of July.

Happening this year from 10th-12th to July, the festival line-up has a very eclectic mix. The headliners include Daddy G (Massive Attack), Norman Jay, Jerry Dammers (The Specials) and Don Letts.

It’s as much as about the venue here as the artists that are playing. Valentia Island is a a beautiful spot on the edge of the world. As well as having some beautiful scenery. It’s also one of the locations of the Dark Sky International Reserve; a place where you can view the night sky better than most other places in the world.

The festival is complete with three stages: Secret Sounds, Radiomade Stage and the Blind Pig stage. What drew my attention was the amount of artists that have been previously featured on Eirecana. It’s quite a list of acts appearing: Corner Boy, Fox Jaw, John Blek & The Rats, The Eskies, The Hot Sprockets, Mongrel State. It’s hard to suggest what to go see. One I would recommend is Mongrel State. Formally known as Moo!, they are a band I haven’t seen live yet but if the energy of their recorded output is anything to go by, their performance should be a lot of fun.

The Festival Website is where you’ll find all the info. Tickets are priced at a reasonable €89 for weekend camping and €50 for day tickets. The festival accommodates Campers too though I don’t know how many spaces are left. You can buy tickets through Eventbrite and keep up to date with what’s happening through the festival Twitter and Facebook.

As well as local headliners Frank & Walters, another local act is making an appearance at the festival. John Blek & The Rats have been one of my favourite Irish bands for quite a while. Cork based John Blek & The Rats will also be making an appearance. The band have recorded their second album I believe so hopefully they might preview a few tracks from it at Valentia. If the beautiful folk melodies of their first album is anything to go by, it should be worth looking forward to.

As well as the main acts, the festival features two distinguished musical events. Saturday night its swing with lots of brass in action and the opportunity to learn a few proper dance moves. On Sunday then, it’s a more relaxing affair with traditional music featuring heavily on the day. Also on the island on the weekend the King Scallop Festival takes place. So you’re definitely not short of options.

One band that would usually be outside of what I write about here on Eirecana but I have developed a gra for is The Vincent(s). Their moody rhythmic death pop tones hark back to a mix between late 80’d alternative rock and classic grunge and it’s really enjoyable.

So between dark skies, dance lessons, trad music, nice food, stunning location and one impressive line-up of acts Valentia Isle Festival in the height of summer is proving quite the temptation.